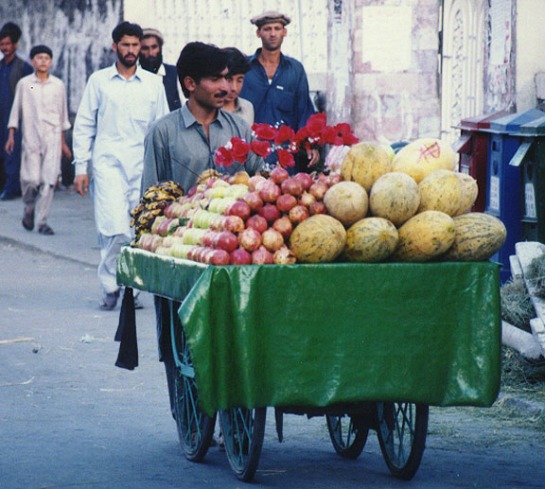 I stopped the car by the side of the road.  There was no fruit at the bazaar; the festival of Eid means that everything shuts down and there are as few supplies in the shops as there would be on Christmas Day in England.  The fruit-seller at the end of our street somehow had his cart piled with apples, peaches, bananas, and the last of the summer mangoes.

He greeted me warmly.  We chatted about prices for a while and then he started to put fruit into the set of scales on one end of his cart: first crisp red apples, then peaches, then mangoes which he said would be the last this year; they seem to disappear with the summer heat.  A kilo of each, plus a dozen bananas, came to about £4.

My daughter, five years old, climbed out of the car and came to stand by my side.  She watched the fruit-seller closely, then whispered in my ear:

I hadn’t noticed, but his left arm ended below the elbow.  I asked him what had happened.  He told me how he was born in Kashmir near the Line of Control.  One day, as a child, he found a round, metallic object in a field near his house.  He picked it up, and it – a landmine, perhaps, or a bomb dropped from the air – exploded, taking off his left hand.  He told all of these things in the painfully straightforward, unemotional manner in which Pakistanis seem to relate extraordinarily tragic and painful things.

I translated for my daughter and she looked at him, wide-eyed.  He smiled and tickled her on the cheek.

“Praise God, you have wonderful children” he said, smiling.

We drove home in silence.  We stopped outside our house and I turned off the engine.  My son’s voice broke the silence.