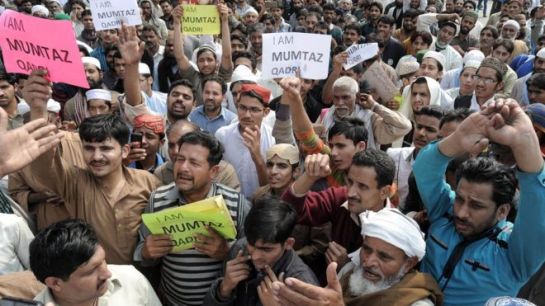 Yesterday morning Mumtaz Qadri was hanged in Adiala Jail in Rawalpindi.  In case that statement is provoking a question of “Who?”, allow me to refresh your memory.  In 2011 Qadri, a security guard, assassinated the man he was assigned to protect: Salman Taseer, the Governor of the Punjab.  Taseer had in the past criticised the implementation of Pakistan’s controversial blasphemy law. This was sufficient to guarantee his death, which was carried out in a popular shopping area of Islamabad in early 2011.

Qadri instantly confessed to the crime and claimed he was proud to have been responsible for it.  It was as open-and-shut a case as can be imagined.  Yet it was the response of Pakistani society which was the most repugnant part of the case.  Qadri was garlanded with roses, honoured as a hero, and the police motorcade which took him to and from court was showered with petals and welcomed with singing.

His trial went on for years – as ought to be the case when people are faced with the death sentence.  His appeals were turned down.  His final appeal to the President of Pakistan was also rejected.  At 4.30am yesterday morning he was taken from his cell and hanged.  The response across Pakistan has ranged from fury – from the religious parties who honoured him as a hero – to shock – from people who thought the government would never dare do something which was so plainly guaranteed to offend the religious right wing.  I couldn’t get to work yesterday as the buses were cancelled, and today my children are not going to school because all schools are closed in fear of what might happen next.

I do not celebrate his death.  I am opposed to the death penalty and firmly believe, as the poet John Donne wrote, that “Any man’s death diminishes me / Because I am involved in mankind”.  Yet right or wrong this feels like one of the most significant things to have happened in Pakistan for years and years, because it is a repudiation at the highest possible level of the virulent Islamist tendencies which have afflicted Pakistan over the last couple of decades: the growth of domestic terrorism, the increasing power of Wahhabi Islam, the marginalisation of Pakistan’s minorities, the increasingly angry and militant nature of Pakistani Islam.

Nor is this the only recent situation illustrating the changing nature of life in Pakistan.  Last November the Prime Minister, Nawaz Sharif, gave a speech commemorating the Hindu festival of Diwali and calling for Pakistani minorities to be celebrated and accepted.  More recently the Punjab Government banned the Tablighi Jama’at, an Islamic missionary organisation, from preaching in schools.  Then the government in the Punjab passed an act making violence against women illegal and punishable by jail.  Only yesterday a Pakistani film-maker won an Oscar for her documentary about honour killings in Pakistan – the Prime Minister arranged a screening in government and has promised to do more to improve the situation.

Small steps, no doubt.  Yet somehow it feels as though the tide is beginning to turn in Pakistan.  The Army Public School attack in Peshawar which killed 140 schoolchildren marked a low point – yet we may well look back, one day, and see that it also marked the beginning of Pakistan’s redemption, as the authorities finally woke up to the peril facing the nation.

For now, we are on lockdown again, our first for two years or so, yet somehow this one feels more optimistic than usual.  Perhaps some good will come out of this gruesome murder and this sad execution.