A new metro bus service recently opened in Rawalpindi and Islamabad.  This deeply impressive, stunningly efficient service is really something remarkable and I will write about it at a later date.  What I want to write about today, however, is how the authorities responsible for its construction go about claiming the credit for it. 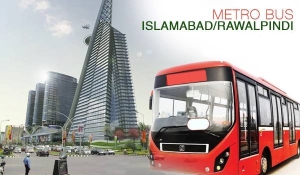 On the day of its inauguration massive posters were plastered over every single one of its 20 or so stations.  These posters bore the faces of Nawaz Sharif, the Prime Minister of Pakistan, and of Shahbaz Sharif, his brother, who is the chief minister of the Punjab.  At every single stop commuters were reminded of precisely who built the metro bus, and to whom the credit should go.

This habit of loudly claiming credit for acts of civic generosity is not uncommon in Pakistan.  Our kids enjoy going to a large park near our house.  Outside its main gate is an immense rock with the names of the people responsible for its construction carved into its monolithic face.  Another park in Rawalpindi is called “Nawaz Sharif Park”, just in case you weren’t sure whom to thank.  Hospitals and charitable institutions frequently bear the names of the people who founded them: the Shaukat Khanum cancer hospitals, the Begum Samina Khan Welfare Trust, and so on and so forth.  Any form of charitable activity is loudly and brazenly flaunted to ensure that its beneficiaries are fully cognizant of the generosity of those responsible.

It may seem churlish to complain about this.  After all, there is plenty of need in Pakistan, so surely any effort to tackle the immense inequality in Pakistani society is to be praised, right?  And of course this phenomenon is by no means limited to Pakistan.  Hospitals in the West are frequently labelled with the names of the donors who made their construction possible.  I heard of a church which organised a giving day to raise funds for some project or other, and loudly and publicly proclaimed the names of those who had given the most.  Friends of ours who organise charitable events and ask for sponsorship have lists of people who have donated.  There is an option to make one’s donation anonymous, but nobody ever does.

Jesus, on the other hand, told his followers to give so secretly that even their left hand didn’t know what the right hand was doing.  The correct model, he said, was a widow donating a tiny amount in secret, rather than braggarts donating as lavishly and as ostentatiously as possible.  The point is this: what are the intentions of the giver?  Are they honestly aiming to effect a radical redistribution of wealth in order to improve global equality, or are they trying to buy themselves some credit?  If their goals are merely selfish then it devalues the whole exercise, making a noble act somewhat seedy.

As someone whose livelihood depends entirely on the charitable giving of others, this affects me profoundly.  I’ll be thinking about this topic more and more as I travel on our beautiful new metro buses…