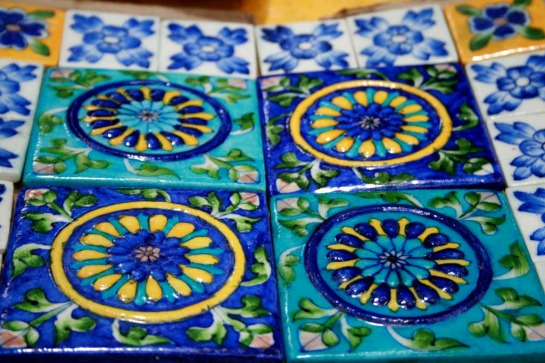 I pushed open the door of the shop and walked in.  The transition was startling.  Outside was a busy road with minibuses, trucks and rickshaws clattering to and fro, creating the noisy backdrop which features in all of my memories of Pakistan.  Next to the road was a muddy pavement, puddled with water and deeply rutted, and then was the shop, a plate-glass thing of wonder.  It was beautifully clean, air-conditioned, and well lit.  It was a housewares store and rows of lamps, sinks, toilets and bathtubs greeted me, all impeccably clean.  This was where wealthy Pakistanis come to decorate their homes.   A smartly-dressed attendant came straight over to ask if he could help me at all.

“I need some tiles” I said after we had salaamed back and forth for a bit.

I asked for the prices.  My purchasing decisions in life are generally dictated more by price than by design, and I’m glad I asked because the price of these tiles was high.  I tentatively asked if there was anything cheaper.

“Well, yes” he said hesitantly, “we do have cheaper ones.  But they’re Pakistani”.  He shrugged apologetically.  After I persisted in asking to see them he grudgingly took me to a separate display of local tiles which were just as beautiful as the imported ones but for a fraction of the price.  I bought some of them – but only after insisting repeatedly that they were fine for my needs.  I know that shop-keepers will automatically try to upsell their products, to make as much money as possible from a transaction, but this felt different.  It was as though anything locally made was inferior, shoddy, not worthy of my attention.

Pakistan has an inferiority complex.  It is baffling.  I appreciate that the country faces challenges and is maligned in the media, but the criticism levelled at Pakistan by its own citizens is bizarre.  Wealthy people will only purchase imported products, turning their noses up at anything local.  Pakistani people will sometimes criticise Pakistani people, insisting that most of them are crooks.  A mechanic once told me that everything could be found in Pakistan, except for “an honest person”.  And then there was the security guard who told me that Pakistani people couldn’t be trusted – yet as he himself was Pakistani I wasn’t sure whether I should trust that statement or not…

Yes, Pakistan faces problems – but it also contains some remarkably friendly people, some stunning scenery, the best fruit in the world, some of the best pottery in the world, and an automatic hospitality of genuine warmth.  I just wish more Pakistani people would feel proud of themselves and of their remarkable, fascinating country.