I’ve had enough of hearing about the Boston marathon bombings.  Not because they weren’t terrible – they were.  Not because I don’t have sympathy for those killed and injured, and their families – I do.  My reason for being thoroughly fed up with the incessant stream of updates is that they seem to indicate that some human lives are worth less than others.

Three people were killed in Boston on April 15th and many more injured, some of them seriously.  That’s horrible, but I want to put this in some kind of global perspective.  The day afterwards, April 16th, some 42 people were killed and 257 more injured in a series of bombings in Iraq.  In Syria scores of people, including women and children, are dying by the day.  In Pakistan only yesterday eight people were killed in in a string of attacks.  These events made the news – but only just.  They attracted barely a fraction of the attention that was lavished on the city of Boston which suffered far fewer casualties.

The fact that the Boston bombings were out of the ordinary was a factor, of course.  Terrorist attacks on mainland USA are rare, whereas bombings in many parts of the world, including Iraq, Syria and Pakistan, are depressingly commonplace.  But even so, the disparity in coverage concerns and depresses me.  It’s hard to escape the notion that the value of a human life varies from country to country.  It reminds me of the dark joke which came out of the 2005 Indian Ocean tsunami, when people protested the disparity in media coverage by saying “3 Americans killed in tsunami”, implying that the other 230,000 of different nationalities didn’t matter so much.

It’s probably naïve of me to hope that one day people might care as much about a street kid in Karachi or Kenya as they do about marathon runners in Boston, but I refuse to submit to the unspoken understanding that the life of one is worth more or less than that of another.  The whole world is worthy of our attention, not just the areas in which English is spoken, iPads are purchased, and people drink Starbucks. 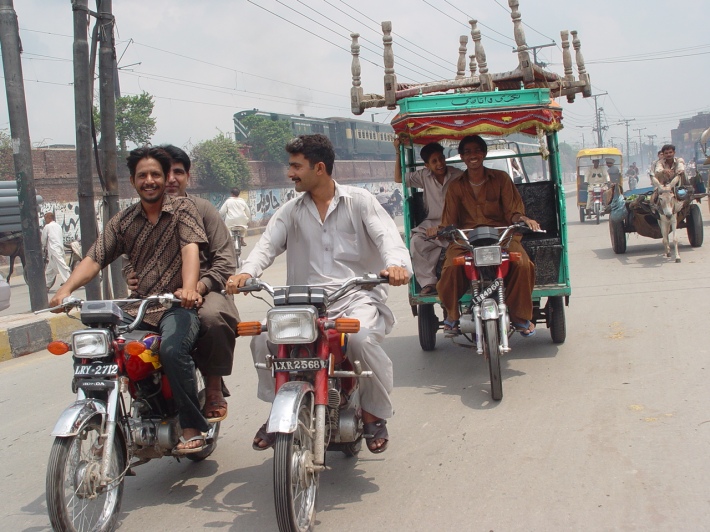 People make generalisations about Pakistan all the time.  I don’t like it when they do, because they tend to be negative – “it’s dangerous”, “Pakistani people hate the West”, “it’s a failed state”.  But here I am making another one: Pakistan is a remarkably hospitable country.

It really is.  I used to post updates on Facebook of all the times people treated me differently because I was a guest: taxi drivers who refused to take my money, vegetable sellers who were so charmed by my stuttering Urdu that they gave me free tomatoes, shop-keepers who invited me to drink tea with them after an acquaintance of, oh, two minutes.  After a while I stopped because there were just too many stories, and people were getting bored of them.

Perhaps in stopping these updates I did a great disservice to the people of Pakistan because hospitality is the salient characteristic of the people here, by a long way.  When you watch the news you may get the impression that people here are angry and hostile.  When I walk through the bazaar, on the other hand, my impression has been unremittingly positive.  People here are instinctively and unfailingly polite, charming, helpful, and welcoming.

I have so many anecdotes I hardly know where to start.  A week ago I went to a different bazaar to buy vegetables and had to insist four times before the stall-holder would accept my money.  A taxi-driver a month or two earlier was slightly easier; I only had to insist three times.  Once I was driving with a friend when his car broke down.  Two passers-by dashed over to help us push it to a nearby gas station to get it fixed and steadfastly refused payment afterwards.  Buying bread from a tandoor (clay oven) a while back was tricky in that the roti-wallah refused payment on the grounds that we had been away from Pakistan for a month and he wanted to welcome us back.  Another time, on a trip to a city in the Punjab, some desperately poor people invited us into their home and insisted that we drink Pepsi, even though the price of a single bottle could have fed their family for a day.

I can’t promise that this hospitality is innate among every single person in Pakistan; I imagine there are some who are so hostile to the West that, were they to meet me, hospitality would be the last thing on their minds.  What I can say is that after two years and several hundred personal meetings with Pakistani people every single one has been polite and hospitable.

Here’s a final thought.  If a Pakistani were to travel to the UK, or Canada, or the USA, or somewhere else in the West, and met two hundred or so individuals, would every single one be hospitable and polite to them?  How about you – if you met a Pakistani on the streets of London or Toronto wearing shalwar kameez and a prayer cap, what would your initial thoughts be?

Next time, why not try being polite?  Saying “salaam aleikum” and smiling goes a long way, you know.  It might be the most Pakistani thing you do all day…

One of the consequences of living in a newsworthy country like Pakistan is that people always want to know what it’s really like.  The media is at least partly responsible for this interest: people see images of bomb attacks, drone attacks, protests and other events in Pakistan, then remember that they have a friend living in that same country, and immediately want to know how things seem from our perspective.

Answering this question takes more time than they usually want to spare for the simple reason that Pakistan is a complex country.  Everyday life defies simple explanations, which is what people usually want.  Contrasts exist in Pakistan like nowhere else I’ve experienced.  I’ve seen camels strolling casually down a major city street, side by side with brand-new Land Cruisers and Corollas.  I’ve seen brand-new frozen yoghurt shops that seem to have come straight from California – and penniless Afghan orphans sitting outside, sifting through rubbish to earn a crust of bread.  In major cities here you can eat imported American cheeseburgers alongside Pakistanis wearing designer clothing and taking pictures of each other on iPhones, and then walk outside to see homeless casual labourers dressed in rags waiting for work.

So, in an attempt to answer this question, I’ll write a series of blogs about this wonderful, perplexing, bizarre country, in an attempt to provide a more rounded and realistic impression of Pakistan than one tends to get from the news outlets.  Stay tuned!